Blog - Latest News
You are here: Home / News About Our Clients / Thongs for larger men? Life lessons from a big-and-tall retailer 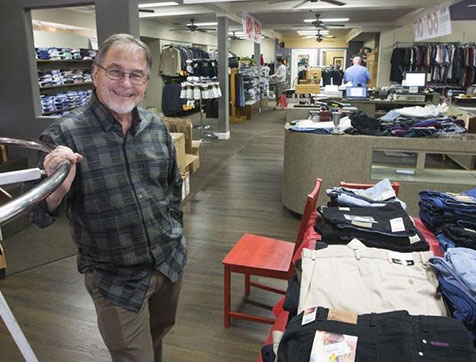 After 35 years of serving the big and tall community, Ed Huffman will be closing his doors and retiring. Marty Bicek mbicek@modbee.com

Thirty-five years ago, Ed Huffman was 24 years old, working as a mechanic for Caterpillar and looking for a change.

“I didn’t know what it was, though, so I started looking at this, that and the other thing,” Huffman said in an email. “I looked at franchises and different businesses and kept looking around to see if I could figure out what it was I was looking for. Somehow, I stumbled into the menswear business.”

At the time, though, Modesto was home to nine independent clothing stores, Huffman said. What we didn’t have was a big-and-tall store. So Huffman, a slender man who stands 5-foot-8, opened one.

“Customers will come in and ask if I’ve lost a lot of weight because they can see I’m not tall, so they’ll assume I was ‘big,’ ” he wrote. “I tell them, ‘No, I used to be 6-8 but it didn’t take long for the government to whittle me down to 5-8 with taxes and regulations.”

Huffman opened his store in Modesto’s Century Center on the east side of town. He soon expanded and then outgrew the place completely. He found a new spot downtown, a building on 14th Street that formerly housed a ski shop (Jack’s Ski Chalet, if I recall correctly). That’s where he’s been for the past near quarter-century. And that’s where, sometime later this year, he will close up shop for the last time.

Huffman has been toying with the idea of retiring for some time – a local attorney’s offer to buy the building made him decide the time was right. He plans to keep busy, working as a personal clothier to some of his longtime customers, using a mobile app rather than a showroom.

We talked this week about his history in retail (“Talk about on-the-job training,” he said), hiring a company to help him close down the store (“I only know how to keep it running”), and the keys to success in small business (“treating people right, getting to know your customers … and being honest”)

I also asked Huffman about his most interesting customer interaction. He said that definitely had to be from a woman who was in search of thongs for men in larger sizes. That’s not something he had stocked, so he inquired if this customer had found them elsewhere. Oh, yes, she said, she’d bought them several times over the years.

“Finally, I figured out she was talking about flip-flops,” he said, laughing.