Blog - Latest News
You are here: Home / News About Our Clients / Skluts Menswear to sell entire inventory, close doors after 88 years as... 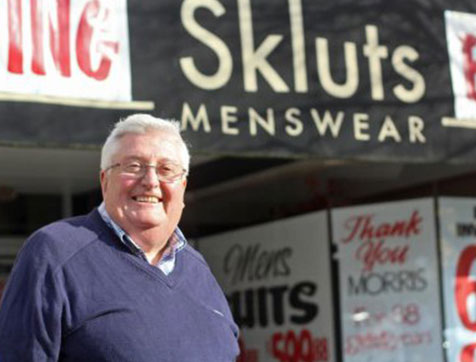 MORRIS – For as long as most men who live in Morris can remember, one of the things they could count on was where to get a suit or some dress clothes.

It was simple. Skluts Menswear, 307 Liberty St. From weddings to funerals to prom or homecoming or just general dress to dress-casual type of clothes, Skluts has been the go-to store for Morris men.

However, the local retail icon, which has been doing business in downtown Morris for almost 90 years, will sell its entire inventory and close its doors as owner Jim Riebe brings his own 50-year retail career to an end.

“I’m going to miss our customers, but you know when it’s time. No one can do something forever,” Riebe said. “Someone told me that you should retire when you can – not when you can’t. I think that was great advice and I know this is the right time to do it while I can pursue some other interests.”

The store’s inventory sale opens to the public on Wednesday, Riebe said. Skluts Menswear will be open 9 a.m. to 8 p.m. weekdays and 9 a.m. to 4 p.m. Saturday and noon to 4 p.m. Sunday during the sale.

Always dedicated to customer service, he said he plans to stay through January, as he already has booked some weddings and doesn’t want to disappoint those customers. However, no more new clothes will be coming into the store.

Sklut’s Menswear was founded in 1928 by Abe Sklut, and employed several generations of family members over the years. It was taken over by his brother, Harry Sklut and nephew, Ben Sklut.

Riebe’s own career in retail began as a high school student, when he was hired for a part-time job in the men’s department at a Carson Pirie Scott store. After attending Eastern Illinois University in Charleston, he entered Carson Pirie Scott’s management program.

“I was a store buyer, assistant manager and manager, but always thought I’d like to own my own store,” Riebe said.

The businessmen got together and Riebe purchased Sklut’s in 1985. Sklut’s continued to thrive, thanks to the Morris area’s strong economic base and the community’s commitment to its downtown merchants.

“I just can’t say enough about how important the support our community and public officials has been to the downtown and to our business over many years,” Riebe said. “Things like the 3 French Hens Market, Cruise Nights and Home for the Holidays really help to keep people connected to the downtown. It’s a commitment you don’t see in a lot of communities.”

While big-box stores took their toll on independent men’s clothing stores across the country, Sklut’s more than held its own due its personal touch.

“Customer focus has been our big salvation,” Riebe said. “You go through happy and sad times with the same people. Sometimes you are doing a wedding for a family and sometimes a funeral, but you stay connected with the people and they stay connected with you. I have seen plenty of men bring their sons in for their first suit, and then those sons bring their own sons in.”

Riebe said he has enjoyed many different interactions with customers through the years at Sklut’s.

“You start off with customers, and they end up becoming your friends,” he said. “I’ll miss the people a lot but, as I told my wife, we’ll go on to the next chapter in our lives and it’s going to be wonderful, too.

“We just haven’t had a real vacation in about 20 years. You get in a routine. There’s prom season, then wedding season, then graduation season, then Father’s Day, then the apparel shows. It’s a grind, and even though the heart and mind might be willing, the body needs a break. I love this place, but I also don’t want it to be the last place I see.”

Thongs for larger men? Life lessons from a big-and-tall retailer

Continental Clothing closing after 120 years in business
Scroll to top