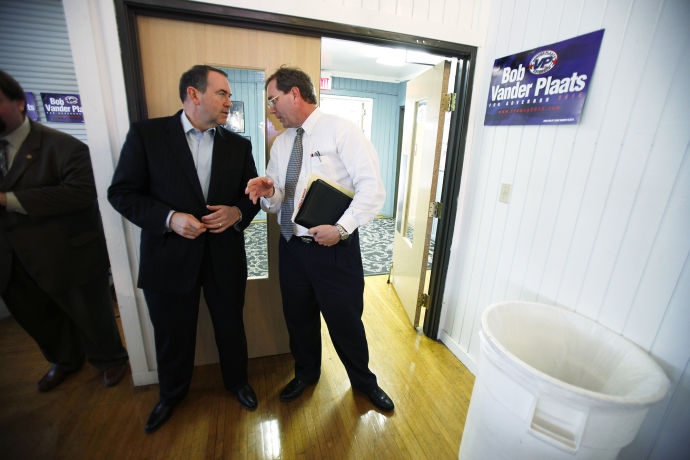 Eric Woolson’s office, in West Des Moines, is decorated with images of politicians and cats. The former are photographs of clients past and present (President George W. Bush, Mayor Steve Gaer, County Supervisor Robert Brownell), and the latter are mostly paintings with alliterative titles (“Cherries, Canaries, and the Big Cat,” “Ferile Feline at the Fishpond”). Woolson is an Iowa Republican operative, best known for managing former Arkansas Governor Mike Huckabee’s resounding victory in the 2008 caucus. He is also something of a serial rescuer, having picked up thirty-one stray cats in the past two years.

Who is doing the job right at the moment? “The inside money really seems to be on Ted Cruz,” Woolson said, sitting beneath twin pieces of cat art. “Ben Carson, early on, had a lot of socially conservative folks who are potentially first-time caucus-goers—and I say that because you still have to turn them out. But Cruz has focused on the right people that have been through this process before and know what they’re doing.”

This cycle, Woolson signed on as the Iowa director of communications for Wisconsin Governor Scott Walker, who entered the race in July and exited it in September—the shortest campaign of any candidate. Woolson offered a postmortem: “It’s really a case of an organization expanding too far too fast,” he said. “They claimed they were all-in on Iowa, but they had four people on staff here and eighty people in Madison. So clearly Iowa was not the priority.”

The brevity of Walker’s campaign has afforded Woolson time to focus on his other business venture: growing, processing, and selling his own line of catnip. Propped up on his office mantel, alongside tchotchkes from former clients—a note from Huckabee, a golden paperweight from Iowa Governor Terry Branstad—was a dime bag with a cartoon image of a cat, and the words “Just Buds.” The copy on the back of the bag: “Our special ‘Just Buds’ are the best part of the catnip plant.”

Click on “Iowa Caucus’s Catnip King” for the rest of the story.

Looking for a Shortcut to a Better Long-Day Onion