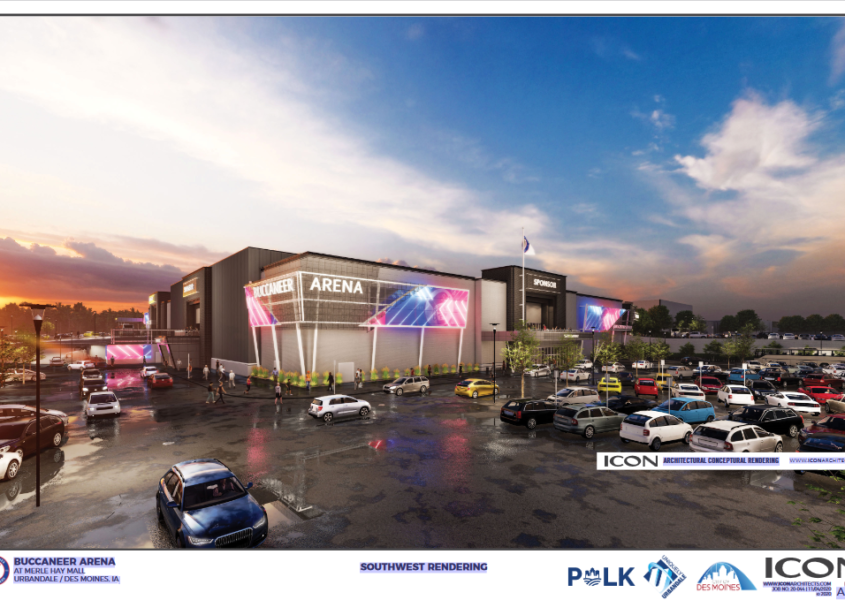 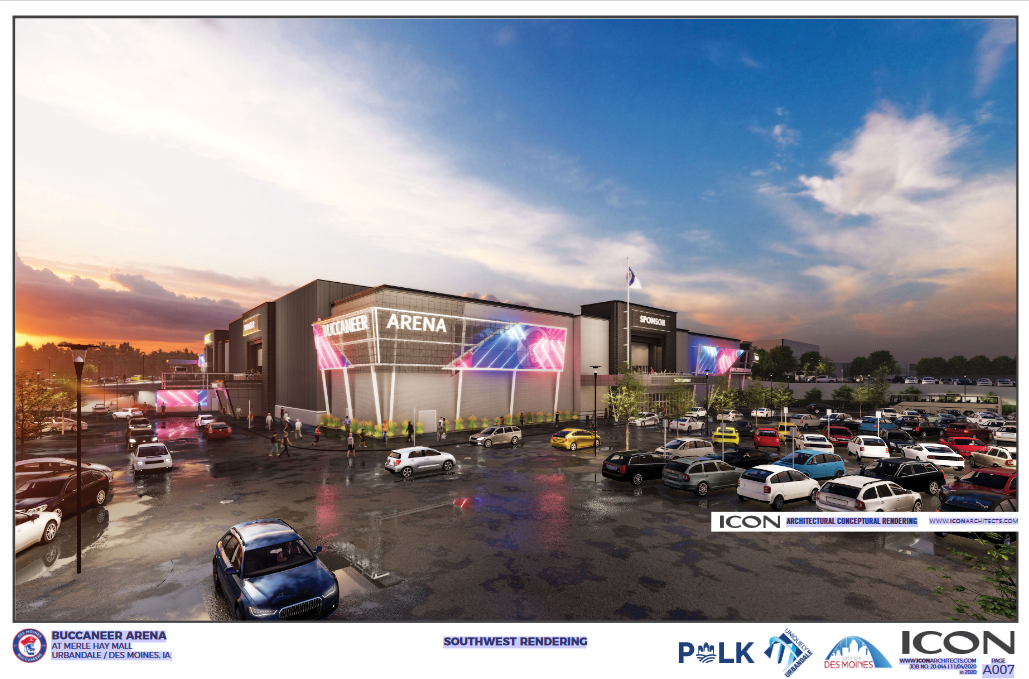 URBANDALE, Iowa – The plan to convert the former Younkers department store in the Merle Hay Mall to a 3,500-seat arena that will be the home of the Des Moines Buccaneers hockey team will have an estimated $126 million annual economic impact and create approximately 1,000 new jobs, according to Liz Holland, chief executive officer of Merle Hay Investors, which owns the mall.

Holland, who also released new details and renderings of the multi-use facility, said the project’s versatility will bring new employment, entertainment, and recreational opportunities to people well beyond the Des Moines metro.

“The nuts-and-bolts details of a real-estate project of this magnitude can easily overshadow the community and charitable benefits but those benefits are really what it’s all about, and you cannot overstate how important those benefits really are,” she said. “This isn’t a duplication of sports and entertainment services that already exist. This project and its benefits are new, unparalleled, and will extend to the entire state.”

The arena is seeking $30 million from the state’s $100-million Iowa Reinvestment District Act fund, which receives revenues from hotel/motel and sales taxes in designated districts to assist with financing for projects that improve Iowans’ quality of life. A pre-application will be filed by Feb. 22. The total private investment in the project is $120 million, which means each dollar of state funds leverages four dollars in private funds.

“This project is lined up and ready to go when all the funding pieces are in place,” Holland said. “We are on track to begin work right away with the goal of opening in fall 2022.”

The construction phase of the project alone is estimated to create 130 construction jobs and generate an estimated $140 million in new spending at the arena, training center, and mall campus.

The multi-purpose functionality of the entire complex is a key aspect and Holland underscored the adaptability of the facility, which also can be converted into regulation volleyball courts, indoor soccer pitches, regulation wrestling mats as well as space for trade shows and community-based business shows. The arena can also become a 4,000-seat indoor concert and event arena.

“We see the versatility of this space as a tremendous asset that will have the ability to attract additional events to the metro area, including an anticipated 370,000 visitors annually,” Holland said. “Having restaurants, entertainment and 80 retailers all on the same campus as this multi-purpose facility will ensure that Des Moines has an attraction like no other in the country.”

Buccaneers co-owner Michael Devlin said the arena will create more recreational opportunities for local youth and young Iowans who see hockey as a path to a sports scholarship and college education.

“For years, if kids were on that track they had to leave Des Moines and play in other programs. Here is an opportunity to grow youth programming, keep these kids local and provide them with the better resources this new facility will have so they can get Division 1 scholarships and advance,” he said.

Devlin noted the facility’s four sheets of ice means that it can host 64-team tournaments for youth and junior hockey competitors from “throughout the Midwest, across the country or even around the world.” He also said the facility would give organizations such as Catch Des Moines, which promote tourism and conventions, “another arrow in their quiver.”

“We could have built a stand-alone arena, but the synergy with Merle Hay Mall’s existing and future amenities creates a sum that is much greater than the parts,” he said. “The thousands of people who would be going to an arena somewhere else will be going to Merle Hay, and that’s a key part of this great revitalization story.”

The arena would raise the community’s profile far beyond the state’s borders through televised games and other coverage.

“Our league, the USHL, streams all of its games through a subscriber service that’s very much like ESPN+. College coaches, NHL scouts, families through the United States and Canada and people overseas are watching these games,” Devlin said. “There’s a ton of exposure for Des Moines by having the Bucs here and in a quality facility. One of the first things we did in our old arena  was to update our broadcast equipment to high-definition and the viewer response was immediate and positive. We’ve been in Urbandale for 40 years and we’re looking forward to keeping them here another 40 years and beyond.”

Devlin and Bucs president Nate Teut were recently interviewed for an article for USA Hockey’s publication about the project and the team’s future touting the need for the need for a new, larger facility to continue to grow the sport.

The hockey facility can accommodate expanded youth leagues for boys and girls, introducing the sport to youngsters who have not played the game before. Additionally, it could serve as a home for sled hockey, which is played by people with disabilities.

Recent retail industry conversations have focused on which activities come back the soonest in a post-COVID environment with Holland noting, “Discussions revolved around entertainment, movies, shopping, dining and sports, and the number-one activity that everyone believes will come back the fastest is youth sports,” she said. “That’s where many industry veterans believe pent-up demand is the strongest.”

Holland said the venue is also likely to attract fundraising walks, other charity events and school-related functions such as graduation ceremonies and a wide variety of sports tournaments.

While the damage inflicted on the Bucs Arena by the Aug. 10 derecho accelerated the team owners’ efforts to “move sooner than later from a 60-year-old building that is past its lifespan,” Devlin said the project’s planning has been underway since 2018. “We’re in a situation where we’ve got to get moving one way or another as soon as possible,” he said.

Holland said, “Some people believe this project came together because of last summer’s storm when it really has been 36 months of Herculean effort by Polk County, the cities of Urbandale and Des Moines, two local businesses and many others. Now, all of the chess pieces are starting to move around the board in the order that we’ve all been working very hard on for the last three years, so that is very exciting.”

She added, “This project will be a catalyst to transform northwest Des Moines, eastern Urbandale and surrounding residential and business neighborhoods. Our campus is an anchor for this part of the Des Moines metro, and this cutting-edge project will ensure this area is economically vibrant, produces and retains more jobs, remains a desirable place to live for its residents, and provides more quality-of-life opportunities.”

Woolson appears on KCCI’s “Close Up” to talk about Polk County...