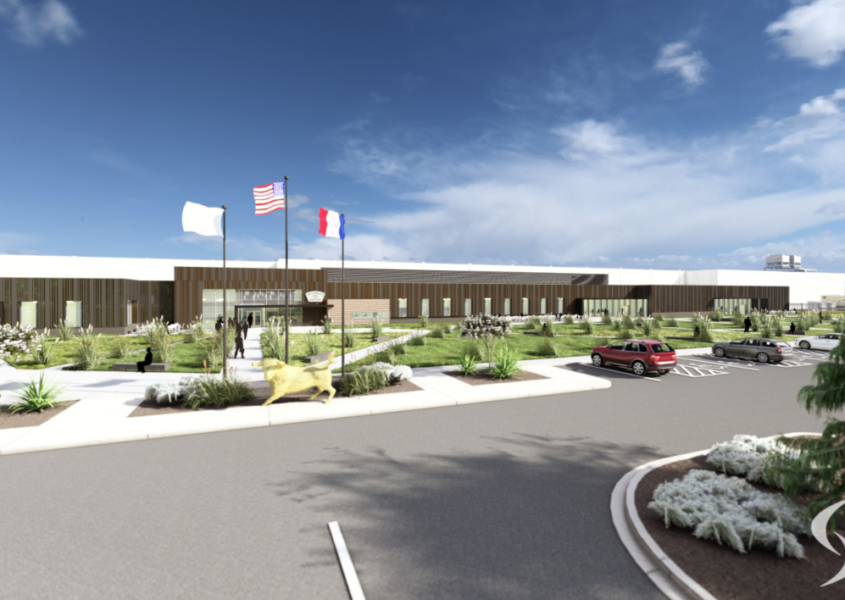 DES MOINES – Cattlemen’s Heritage, a newly formed corporation with its roots in livestock production and construction, announced plans today to construct a $325-million, 1,500-head-per-day beef-processing facility in Mills County that will employ up to 750 workers and have an estimated annual economic impact of $1.1 billion.

“Cattlemen’s Heritage will fill a critical gap between the conglomerates and the outdated, under-sized lockers and plants that aren’t equipped to meet the needs of consumers, producers or retailers,” said project developer Chad Tentinger, founder and owner of TenCorp. Inc., a cattle industry construction firm with offices in Des Moines and Marcus, Iowa.

Tentinger noted that recent market conditions – including several years of weak cattle markets, strong retail prices and the increased amount of investment capital on the sidelines during the pandemic – are other reasons to move forward to the facility’s construction to expand processing capacity in the state.

“Cattle producers and retailers have recognized for quite some time that as more cattle production has moved north to the Upper Midwest that we need the processing capacity to match it,” Tentinger said. “The Cattlemen’s Heritage facility will go a long way to resolving that ongoing challenge and delivering more quality beef from family farms to consumers.”

The facility, which will be fronted by Interstate 29 and situated at the Pottawattamie-Mills County line, will have an average annual wage of $55,000 plus benefits, he said. Cattlemen’s Heritage intends to break ground in spring 2022 and open the facility in late  2023.

Tentinger also indicated that lessons from the past year’s COVID-19 outbreak in meat-processing plants across the country are being incorporated into design and future operation of the Cattlemen’s Heritage state-of-the-art facility. “The pandemic delivered a powerful reminder that we can’t afford to let down our guard for even a split second, but it has also presented us with a welcome opportunity to make our facility even safer and we will take full advantage of it,” Tentinger said.

Ernie Goss, the Jack A. MacAllister Chair in Regional Economics at Creighton University, said the project will “serve as an economic game changer for Mills/Pottawattamie counties, and surrounding counties.” Once in operation, it will employ approximately 13.3 times the number of workers of the average Iowa manufacturer and pay roughly 12.4 times the average payroll.

“The average salary at the Cattlemen’s Heritage facility will exceed the Iowa average by 5.5%, and the Iowa median salary by 30.3%. From the beginning of construction in 2022 through 2028, the first five years of operations, Cattlemen’s Heritage as planned will support an annual average of 3,319 direct and spillover jobs, wages & salaries of $817.0 million, self-employment income of $414.8 million with a total impact of $6.4 billion,” Goss said.

He continued, “Furthermore, it is estimated that the plant will support jobs paying an average of $55,285 per worker, and state and local tax collections will total $125.0 million between 2022 and 2028. In terms of rate-of-return for locally provided infrastructure support, the project will provide $28.54 for every dollar of local public infrastructure support period between 2022 and 2028.”

Iowa Secretary of Agriculture Mike Naig, who participated in the announcement, said the facility will be a welcome addition to the state’s agribusiness infrastructure.

“Creating value-added agriculture opportunities is important for the success and sustainability of the ag community and our state’s economy. That’s especially true when our livestock producers are seeing large disparities between live cattle and boxed beef prices,” Naig said. “There’s a significant opportunity to expand meat processing capacity around the state. This facility will create additional market access for our producers, new jobs and economic activity in our rural communities.”

“Iowa has a reputation for producing safe, reliable, and quality products that feed our nation and a growing world population,” Reynolds said. “TenCorp, Inc.’s new facility will add greater stability, processing capacity and value to our state’s agriculture industry. I am excited about this project and what it means not only for Iowa’s cattle industry, but the continued growth and expansion of Iowa agriculture.”

“The Mills County Economic Development Foundation is excited to welcome Cattlemen’s Heritage to Mills County. Agriculture is a bedrock industry for Mills County and our regional agriculture base is adding a world class operator and visionary team to the region with Cattlemen’s Heritage. From feed to fork, this project will support local farmers and ranchers while expanding the local and regional economy. It is a big win and we are thrilled to welcome them and support them as this takes off,” Floreani said.

Vino for Vets Raises $150,000 for National Nonprofit Organization That Aids...
Scroll to top