Blog - Latest News
You are here: Home / News About Our Clients / Gentlemen’s Quarter, a Shawano Main Street Anchor for 27 Years, to... 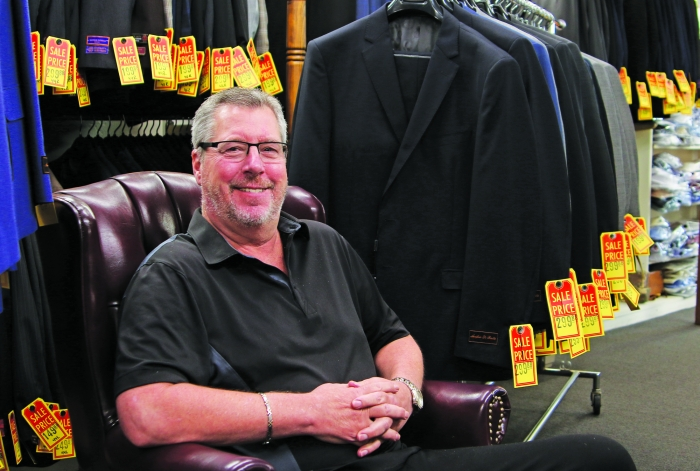 SHAWANO, Wis. – Jeff Kirchner, the owner of the Gentlemen’s Quarter since 1992, always planned on going out on his own terms three years from now. But with cancer changing those plans, he is selling entire inventory of menswear and closing his doors.

Kirchner’s original plan was to retire in 2022 when he reached 45 years in the trade and 30 years on his own, but his time table was unexpectedly moved up when a brain tumor discovered last year resulted in surgery, chemotherapy and a recovery that is still under way.

“My surgeon at UW Madison is absolutely amazing. He was able to get the entire tumor,” Kirchner said today. “If this had happened five years ago, I would not have survived. I’ve been given a second chance at life at 57 and, no matter how much more time I have, I certainly plan to enjoy it.”

He praised employee Riley Courchaine and former operations manager Mark Rindt for their extra effort to keep the store operating smoothly during his illness and lengthy treatment. “Riley is my right-hand man; he really grabbed the helm. Mark came out of retirement to help,” he said. “They’ve gone so far above and beyond the entire time.”

The store has weathered economic storms such as the Great Recession of 2007-09 over the years, but Kirchner’s good memories of the business and its customers are too numerous to count. “Customers weren’t customers; they are friends and family. Every one of them is valued and everyone was treated the same because that’s how I was raised and that’s how I want to be remembered,” he explained.

“I’m one of those guys who always looked forward to work. I’ve never had a day where I woke up and said, ‘I don’t want to go to work,'” Kirchner said. “But, it’s time for a new chapter. Sometimes, books are hard to close but they have to be closed. This is one of those books.”

Kirchner started his retail career in 1977, working at the Green Bay store of a regional menswear store in Green Bay. He worked at several other stores, including The Haberdasher, also in Green Bay, before opening Gentlemen’s Quarter. He was drawn to Shawano, in part, because a number of his customers lived in the community.

“I said, ‘I’m going to open this and see where this goes. I knew in the first week that it was going to be a success,” he recalled.  “But it’s time. I want to spend more time with my family and six grandkids and start doing some of things I couldn’t do over the years because I was tied to the store. I couldn’t ask for more.”

Veteran With Spinal Injury to Throw Out First Pitch at Diamondbacks Game Tuesday...