Blog - Latest News
You are here: Home / News About Our Clients / Cordray, Ltd., a Charles City Retail Mainstay With 130-Year History, to... 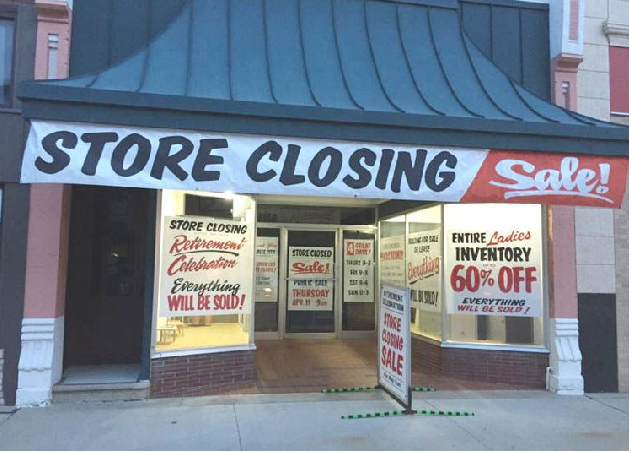 CHARLES CITY, Iowa – Michael Lidd, fourth-generation owner of Lidd & Cordray, Ltd., said today that he will sell his entire inventory and close his family’s 130-year-old menswear store as he prepares to retire after more than 41 years in the retail profession.

“Even before I started my career, I grew up in retail, of course,” Lidd said. “I’d come down to the store before school to clean and fill in stock. I had a twin brother so I was lucky that we divided those chores.”

Lidd & Cordray’s beginning stretches back to 1889 in Audubon, Iowa. “Back then, it was a tailor shop where people came in and clothes were made to measure,” Lidd explained. “In 1906, with a move to Shenandoah, we became more of a retail store. In 1923, my great-grandfather was staying in Waverly with relatives and the plan was to go to St. Cloud to open a store there. He got as far as Charles City and we’ve been in this same location since 1923.”

After high school, Lidd earned a bachelor’s degree in finance from the University of Iowa and moved to Minneapolis to become a buyer for a department store chain that also owned Black’s in Waterloo. Five years later, Lidd returned to Charles City to buy the store from his father and uncle. “It was an opportunity that was too good to pass up,” he said.

Lidd said the changing face of small-town retail has presented its own challenges as customers are more mobile so they often migrate to larger retail centers and tend to do more shopping online. “When I was growing up, there were four men’s stores in Charles City. There were three in 1983 when I came back. Today, we’re the only one and the difficulty is that people don’t browse as much. We’ve become more of destination store, Lidd said.

It was the acknowledgement that women were driving many purchasing decisions that prompted him to add women’s sportswear to his offerings in 2001. Through it all, Lidd attributes the store’s long-running success to its commitment to offer quality goods at fair prices and deliver stellar customer service.

Lidd is a former long-distance runner who completed seven marathons and 12 half marathons after running his first 26.2-mile race at the age of 48. After a knee injury in recent years, he’s taken to bicycling and made a RAGBRAI-like trek with a friend through the mountains outside Yellowstone National Park last year. “I miss running but I love biking. I’ll definitely be getting some ‘saddle time’ after the sale and in the future,” Lidd said.

He and his wife, Peggy, are also looking forward to spending time with their daughter, son-in-law and grandson who live in Minneapolis and daughter who lives in Duluth.

With his retail career approaching the finish line, the former marathoner couldn’t be happier with the way the years have played out. “Forty-one years of working weekends is a long time,” he said. “I’m grateful to have had a very successful and rewarding career in retail.”

Woolson Appears on KCCI’s “Close Up” to Discuss Steve King’s...

Veteran With Spinal Injury to Throw Out First Pitch at Diamondbacks Game Tuesday...
Scroll to top